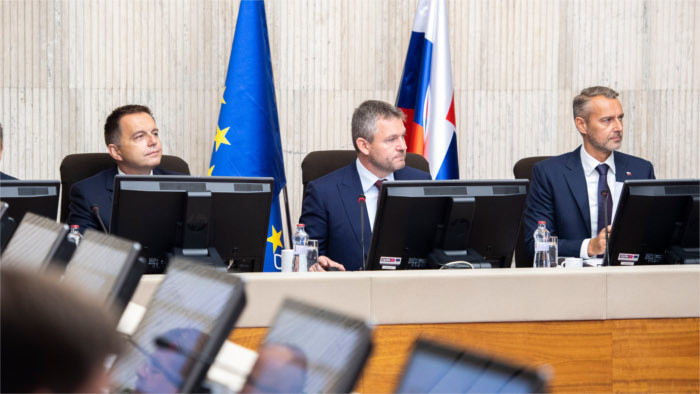 On Wednesday, the Cabinet approved a draft state budget which expects both the debt and deficit to go down in future years. According to the plan, the public finance deficit should fall to 0.1 percent of gross domestic product (GDP) next year for the first time and the economic activities of the state are to be balanced in 2020. The Finance Ministry expects in 2021 a surplus of 0.2 percent of GDP.

"We are on the finishing line of a balanced economy. The journey to reach it was long and winding, yet I am glad I could take part in this journey," said the Finance Minister Peter Kažimír looking back on the past years. Based on his Ministry's latest proposal, the state budget should manage next year a cash deficit of almost €2.2 billion. Its total income is projected at around €15.5 billion; and expenditure should reach approximately €17.6 billion.

It is the positive economic outlook of Slovakia that stands behind the positive budgetary numbers. However, finance analysts think that the Ministry is not taking suitable advantage of the good years of the Slovak economy and that the budget is not daring enough.

"If the government were more cautious with expenditures, we would have had a budgetary surplus this year and not in 2021," thinks the analyst Peter Goliaš from the INEKO institute. The parliamentary opposition is also sceptical of the plans, noting that taxes and levies for Slovak citizens will rise despite the booming economy.

The draft proposal of the budget still needs to pass through Parliament.