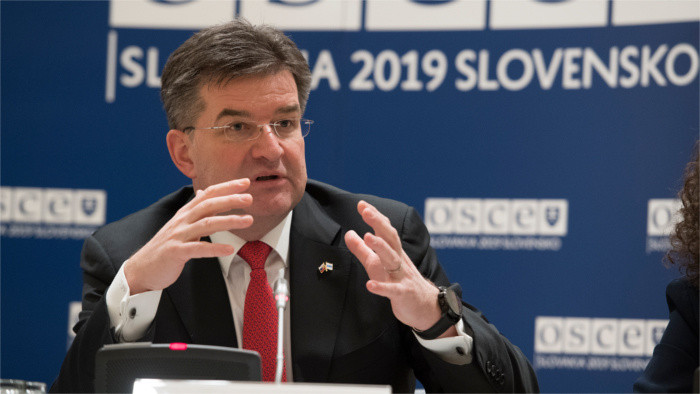 For the first time, Slovakia is presiding over a multilateral organisation with a crisis on its doorstep, said Slovak Foreign Minister Miroslav Lajcak (a Smer-SD nominee) in Vienna where he presented the priorities of the Slovak presidency of the Organisation for Security and Cooperation in Europe (OSCE) for 2019. As he added, for the first time Slovakia would manage an international organisation with such great uncertainty about the future and at a time when multilateralism is in danger.

Lajcak pointed out that it is less than 60 kilometres from Vienna to Bratislava, and then only around 380 kilometres from Bratislava to the border with Ukraine, which is in an armed conflict with Russia. "And what's happening there - in Ukraine and its surroundings - is simply unacceptable. I can assure you that Slovakia feels the urgency of this matter," said the head of Slovak diplomacy at the first annual meeting of the OSCE Permanent Council.

The second priority of the Slovak OSCE presidency is a secure future, keeping in mind the role that communications technology, artificial intelligence and energy innovation will play. According to Lajcak, the third priority is effective multilateralism. The current international challenges - from terrorism to climate change - can be resolved only through cooperation. At the moment, however, we are witnesses to the fact that multilateral systems are under threat. Lajcak stressed therefore that lessons learnt from history, which state that compromise and cooperation are the only way forward, must not be ignored. In this context, the acting OSCE chief called for the re-establishment of multilateralism through specific steps.

OSCE Secretary-General Thomas Greminger, also present at the joint conference, congratulated the Slovak diplomatic service on the fashion in which it was organising and approaching the OSCE Presidency. He also sounded a warning note about the challenges to come in the future, however. "I know, however, that you're prepared," he said. Among the problems inherited from the previous presidency is the 2019 OSCE budget, which still has not been passed to date. The fact that the OSCE started a new year on a provisional budget is nothing new, said Lajcak. "Seeing as this organisation operates on the principle of consensus, we have failed to arrive at a consensus yet."

Slovakia assumed the one-year OSCE Presidency from Italy as of January 1. On December 19, the Slovak Government approved the three top priorities of the presidency, the core motto of which is "Slovakia 2019: for people, dialogue and stability".