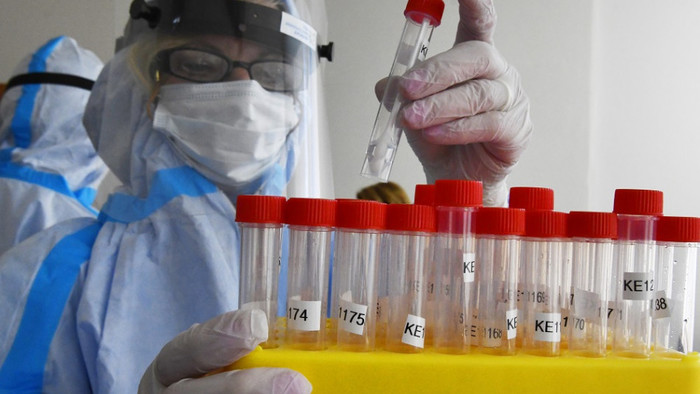 UPDATE: 290 new cases of coronavirus infection were reported on Friday increasing the total number to 6,546. This is the highest number of daily positive cases since the beginning of the epidemic. Currently there are 2,988 active cases in Slovakia, the highest since the beginning of the epidemic. Most new cases are from the districts of Bratislava (34), Tvrdošín (30), Námestovo (27), Trenčín (13), Košice (12), Dunajská Streda (11), Žilina (11), Prievidza (10), Poprad (9) and Stará Ľubovňa (9)

The new cases are mainly contacts of already infected people following some local outbreaks and a few imported cases (mainly from Ukraine). In the districts of Tvrdošin and Námestovo the new cases are traced contacts of a few local outbreaks linked to  family celebrations and weddings. In case of the Trenčin district people who tested positive are contacts of those who got infected at a wedding and three cases are imported from abroad. Epidemiologists have also recorded cases of people who have no travel history and no known contacts with infected people, mainly in Bratislava.

You can find more on the interactive map of confirmed cases. A total of 5,750 tests were performed on Friday.

So far 3,519 patients have recovered (+129 in comparison to the previous day) and 39 people died. Out of the total number of victims 16 were clients of a retirement home in Pezinok where community spread happened and three were from a retiremenet home in Martin.

125 patients in Slovakia have been hospitalized as of Friday with 96 of them confirmed as having Covid-19, the rest are waiting for the test results. 8 patients are in the ICU and 11 are connected to lung ventilators.

If you have symptoms and would like to be tested you should fill in an online appointment form. Do not go to testing centres without an appointment.

According to the Public Health Office, if you were tested for coronavirus you will receive the result of the test by SMS or by email. The result of the test is automatically registered with the public health office too so you do not have to inform them. In case the result is positive an epidemiologist WILL CALL YOU (via the contact numbers you provided when you were tested) and require from you a list of people you came into contact with and their phone numbers or how else they can be contacted. They include: spouses, children, partners and other people living in the same households, colleagues at work, any other people with whom you might have attended some gatherings such as parties, seminars and so on. Epidemiologists will then contact those people and get them tested too.


The Slovak Public Health Office (UVZ) has issued guidelines for those who must stay isolated at home due to coronavirus infection.

Czechia has been placed on Slovakia's list of "risky" countries. As of September 18th those travelling to Slovakia from Czechia will have to either present a negative result for a Covid test not older than 72 hours or enter quarantine in Slovakia to be tested here no earlier than on the 5th day after arrival. Those living in an area of 30km from the Czecho-Slovak border and commuting regularly for work or study as well as those in transit and those with a special status (eg. diplomatic, military and medical personnel, caregivers, pilots and cabin crew) are exempted from these rules.

The option to present a negative test result not older than 72 hours as an alternative to quarantine is introduced for travellers from all EU member states which are on Slovakia's list of "risky" countries (Romania, France, the Netherlands, Malta, Belgium, Spain, Croatia, Luxembourg, Portugal) as of September 18th.

Travellers to Slovakia must respect a set of rules depending on the countries they have visited two weeks prior to their arrival in Slovakia. Those who do not do it risk a fine of up to €5,000.

As of September 1st, employers and employees must respect a new set of rules regarding travelling.

In August 27.2 percent of all confirmed cases of coronavirus infection in Slovakia were imported from abroad, according to a report of the Slovak Public Health Office released on Tuesday. Ukraine topped the list of countries from which the virus was imported to Slovakia with 137 cases, followed by Croatia with 58, Czechia with 54 and Serbia with 20 cases.  Romania, Hungary and Afghanistan follow with 11 cases each, Austria with 10, Poland and Bulgaria with 9 each, UK, Russia and Germany with 7 each. Five cases were imported from Italy and four each from USA, Sweden, France, Finland, Spain and Greece. Holland opens the group of countries from which three cases were imported, that also includes Malta, North Macedonia and Switzerland. Two cases each came from Portugal, Iran, Cyprus, Guinea, Bosnia and Herzegovina, Albania and UAE. At the bottom of the list are Turkey, Syria, Pakistan. Mexico, Luxembourg, Kazakhstan, India, Egypt, Brazil and Australia with a case each.