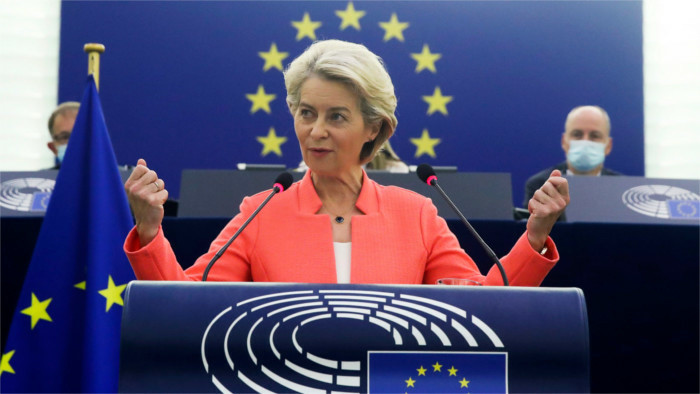 In her State of the Union address on 15 September 2021, the President of the European Commission Ursula von der Leyen discussed current problems of Europeans and tackled challenges the EU is to face in the near future. That is how Slovak MEPs see the EC President's Wednesday speech.

Monika Benova (SMER-SD) noted that the address is the floor for the Commission to prove what has been done for the sake of EU citizens in the past 12 months. According to her, fighting climate change, poverty and discrimination as well as social issues are not priorities for the European Commission. „Protecting or at least securing the life standard of low income groups of inhabitants is something we should start to solve immediately," said Benova.

Martin Hojsik (Progressive Slovakia) summed up that the chair of the EC underlined the urgency of the climate crisis. He also praised her focusing on a fair approach in solving this issue. "I am sure that the key point of solving the climate crisis must be closing the gap on climate finance. We have to help those in need, not those who can lobby. The costs for fighting the climate crisis should be paid by those who pollute, not those who suffer from the pollution," Hojsik explained. As he added, the EU needs to support the transition to local green energies, increase its energetic security and stability and secure a fair approach to everyone.

Michal Wiezik (Spolu/Together) pointed out that no note on the state of woods, agricultural practices or life standards for animals in Europe had been included into the address.

Eugen Jurzyca (SaS) admitted that he had not expected von der Leyen would mention Slovakia and the murder of journalist Jan Kuciak when speaking about judicial murders and the freedom of the media. At the same time, he praised the positive evaluation of the European Commission's fight against COVID-19. "On the other hand, she should have been speaking about decreasing public debt and supporting unpopular reforms as we are facing big problems and there are reforms to be discussed by politicians." As he explained, the EC should be not only talking about but also allocating finances for unpopular reforms in justice, social system or in the field of protecting the environment.