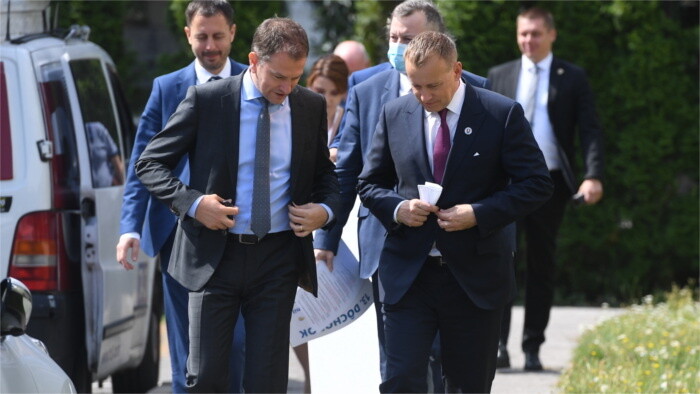 On Sunday, the Finance Minister and leader of the largest governing Ordinary People party Igor Matovič admitted the option that the government might continue without the We are family party. "I will do my utmost to ensure that We Are Family remains a part of the anti-corruption coalition. However, if it blocks a cleansing process and if it still wants to allow the mafia to be able to come up at the last moment with a mysterious key paragraph to purge any criminal, then We Are Family is mentally diverting from the coalition. Then we have to ask ourselves whether or not we are able to maintain the coalition without We Are family," said Matovič. Without this subject, the current coalition would have 75 seats in the Parliament, one short of a majority and it would need support from some other MPs.

The Finance Minister is sorry about We Are Family leader Boris Kollar's decision not to be a part of a working group that is supposed to restore the public's trust in the rule of law.

"I am not opposed to the cleansing, I only say that all those we have relevant evidence against should be brought before a fair trial," said Kollár. Extra-parliamentary Voice-SD leader Peter Pellegrini stated that Matovič is again voicing threats, trying to enter Boris Kollar's conscience and make him choose whose side he wants to be on. According to Pellegrini, the best that can happen to Slovakia is the fall of this governing coalition, so that people can choose in early elections.

At the time of other questions surrounding the current coalition, opposition Smer-SD party leader Robert Fico has called on the extra-parliamentary Voice-SD party to immediately launch negotiations on a form of pre- and post-election cooperation. Through negotiations, Fico wants to achieve that they together have an election result of 35-40%. In 2020, Voice-SD was formed when some of the members of Smer-SD left this party after an unsuccessful election, when the party failed to win the general election after four consecutive victories.

Nevertheless, Voice-SD vice-chair Richard Raši ruled out pre-election cooperation as well as pre-election negotiations on the post-election situation with Smer-SD.