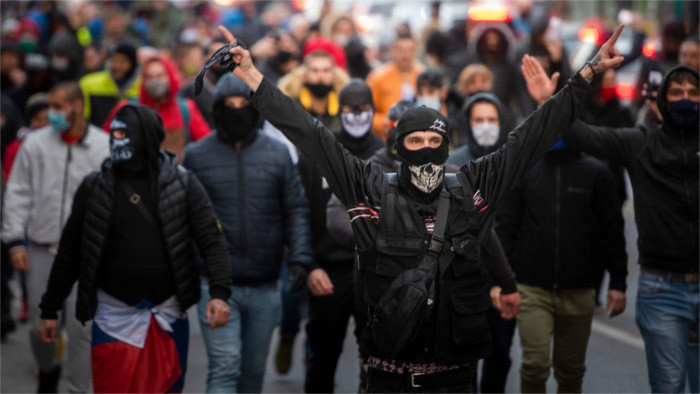 Despite a ban on public gatherings, thousands of people came together in Bratislava on Tuesday, which was a public holiday commemorating the Velvet Revolution that brought down the Communist regime in 1989, to protest against the Government's coronavirus policies.

Masked football hooligans, many of them apparently under the influence of alcohol, began gathering in front of the Main Railway Station around 3 p.m., chanting anti-Matovic slogans. Some of them were carrying banners, including with the slogans: 'Stop the Dictatorial Government', or 'Observe the Law, Observe the Constitution'. They then headed towards the Government Office and Presidential Palace.

Slovakia's national anthem was sung at the protest, and shouts such as 'Matovic Is a Virus', and 'Freedom!' could be heard. Banners likened Matovic to Hitler and the Government to fascists, while some people were wearing Jewish stars with the inscription 'Untested'. This was a reference to the mass testing for coronavirus earlier this month, which the Government called voluntary, but imposed two weeks of self-isolation for all those who didn't take part, along with the threat of fines, as certificates proving a negative test result were widely checked.

Several people delivered speeches in front of the Presidential Palace, including MPs from the far-right People's Party Our Slovakia (LSNS), and its chairman Marian Kotleba.

Meanwhile, similar rallies took place in other Slovak towns, including Košice, Banská Bystrica and Žilina. Those attending the rally in Košice described the Government's anti-coronavirus measures as violating fundamental human rights, the Constitution and other laws. Many questioned the severity of the pandemic and of COVID-19.