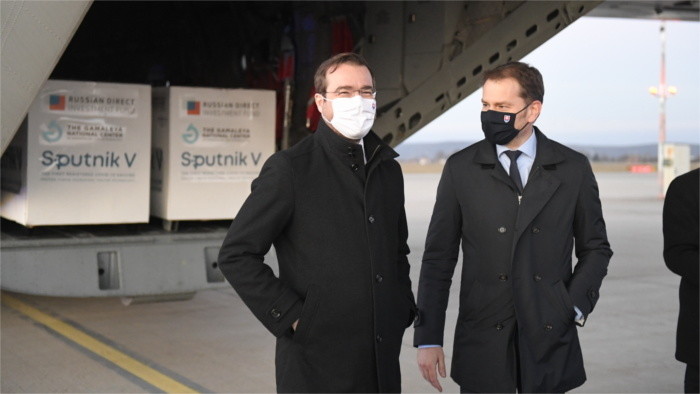 The Health Ministry on Thursday evening released the contract for the purchase of the Sputnik V vaccine, publishing it in the Central Registry of Contracts. "The contract is maximally beneficial for the seller because the buyer assumes all risks. It's a 'take or pay' contract, meaning that the buyer pays regardless of whether they take the agreed quantity," lawyer and doctor Peter Kovac from a company named Kinstellar told TASR. According to Kovac, the buyer, i.e. the Health Ministry, also assumes responsibility for any adverse effects of the vaccine, with the Russians insuring themselves against all risks. Meanwhile, Slovakia can return vaccine doses that are not pharmacologically sound. The lawyer considered it questionable whether the contract entered into force only after it had been published. The contract for the purchase of the vaccines is worth $19.9 million, excluding VAT. It is valid until February 27, 2024.
President Zuzana Caputova, Justice Minister Maria Kolikova (For the People) and the opposition had demanded that the contract should be released. Kolikova pointed out that there was an obligation to publish it and that this was a condition for the validity of the contract, according to Slovak law. The Russians on Wednesday took back 600 doses of the vaccine in order to carry out checks. A total of 2 million doses of the vaccine were purchased by Slovakia two months ago. The move sparked a coalition crisis and eventually led to the replacement of Prime Minister Igor Matovic (OLANO) with Eduard Heger (also OLANO).

Prime Minister Eduard Heger (OLaNO) stated on a private television channel on Thursday evening that he considers the contract for the purchase of the Russian Sputnik V vaccine to be favourable for Slovakia, arguing that there are Slovaks who are willing to be inoculated only with this vaccine. "There are people who do want Sputnik V, and that's why it's the state's responsibility to obtain it," claimed Heger. According to the minister, the value of the contract is "very good". "It's comparable to [contracts for] other vaccines," he claimed.