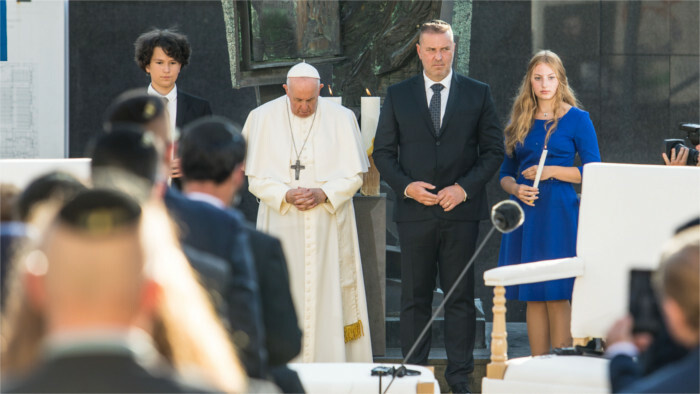 Historic memory cannot be left to fade into oblivion, Pope Francis declared at the site of a former Jewish synagogue in Bratislava on Monday. The Holy Father commemorated the memory of the Holocaust victims. At his meeting with representatives of the current Jewish community, he underlined that faith mustn't be used as a higher principle to justify discrimination and oppression. The Pope noted that the site symbolises dark chapters of Slovak history, when anti-Semitic measures led not only to the trampling of rights during the WW2 state but also the deportation and death of more than 100,000 Slovak Jews. "Here, before the history of the Jewish nation, marked by this tragic and unspeakable confrontation, we are ashamed to concede the many times when the ineffable name of the Almighty was used as a fig leaf for indescribable acts of inhumanity. How many oppressors have declared "God is with us", and yet it was they who weren't with God," underlined Francis. The Pope warned against having history repeat itself. "Because even today, there's no shortage of vain and false idols that besmirch the name of the Almighty," he said.