Orbán: Slovaks and Hungarians bound by their shared fate 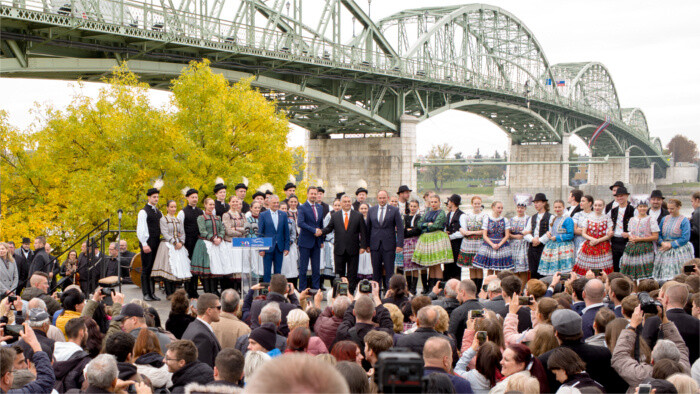 Slovakia is attempting to foment ties with Hungary based on mutual benefit and respect, Prime Minister Eduard Heger stated in the Hungarian town of Esztergom where he met with his Hungarian counterpart Viktor Orbán. On Monday both PMs are marking the 20th anniversary of the reconstruction of the Hungarian-Slovak Maria Valeria Bridge.

Heger pointed out that the Maria Valeria Bridge is a successful project between two good neighbours and established EU members, and its benefits have inspired other Hungarian-Slovak projects. The Slovak Prime Minister also underlined the importance of an interconnected energy infrastructure between the two countries, which bolsters the energy security not only of Bratislava and Budapest but also of the entire region.

"Hostility among countries of Central Europe is senseless. Our survival is guaranteed by friendship and alliance," claimed Orbán. He added that after facing the aggression of occupants in the 20th century, the Slovaks and Hungarians are no longer enemies, as they find themselves bound together by their shared fate.

Even though divided by language, the Slovaks and Hungarians share many similar views. "The Maria Valeria Bridge remains a symbol with a message that we are the future of Europe. Let's not allow anyone to tear down bridges between us," said Orbán.

The reconstructed Maria Valeria Bridge over the Danube River was reopened in a ceremony on October 11, 2001, attended by then-prime ministers Mikulas Dzurinda and Viktor Orban as well as then-EU commissioner for enlargement Gunter Verheugen.