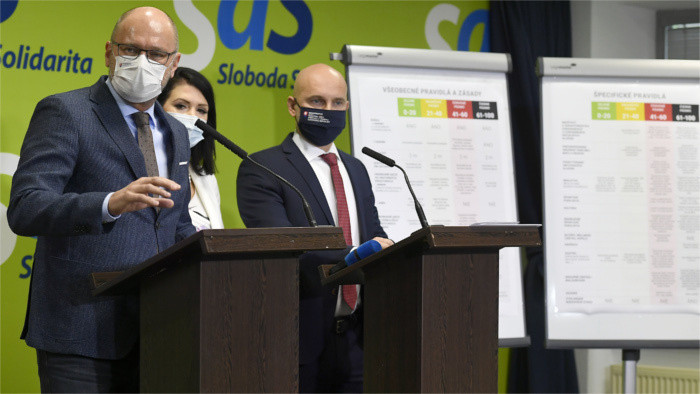 On Monday, the co-governing Freedom and Solidarity party (SaS) unveiled its new pandemic plan called 'Health Traffic Light'. It includes four colours - green, orange, red and black. According to it, Slovakia should be divided into 36 zones according to its regional public health authorities. The chair of the party Richard Sulík believes it is better than being based on districts.

The zones should be evaluated according to the overall incidence, incidence among 65 year olds and above, speed of spread and positivity rate. According to this plan, there would only be one black zone in Slovakia (Vranov nad Topľou) and two green ones (Lučenec and Veľký Krtíš) at the moment. The plan should not restrict people from travelling between zones, however, a curfew would be in place for black districts.

Regarding other measures reducing mobility, Sulík advocates the scrapping of free train travel for students and the elderly and recommends reducing travel on public transport during the pandemic. The co-governing party proposes drawing up an IT application for tracing the contacts of those who have tested positive for coronavirus. SaS thinks that mass testing should be carried out among people with symptoms in schools, care homes and before sporting events, for example. Special testing procedures should be in place on borders and for key entities and companies with more than 1,000 employees.

The plan also includes the mandatory wearing of face masks in public interior areas along with the claim that such a measure is effective. People older than 65 should receive 15 face masks via the post each month. Also included in the plan is a safe distance of two metres to be observed in public, especially in queues.

It is unsure what will happen with the plan. SaS should present it to the Central Crisis Management Team on Monday. "We are ready for discussion. Let us adopt one logical system, which is predictable. It is very important that this plan would apply in the long run and everyone would be able to adjust their lives to it," said Sulík criticizing that so far, people did not know what they could expect.


On November 11, Prime Minister Igor Matovič called to Sulík to come up with a solution which would improve the situation regarding COVID-19 and would allow more businesses to open. However, one week later, the PM said that Sulík could offer his plan to Mongolia.