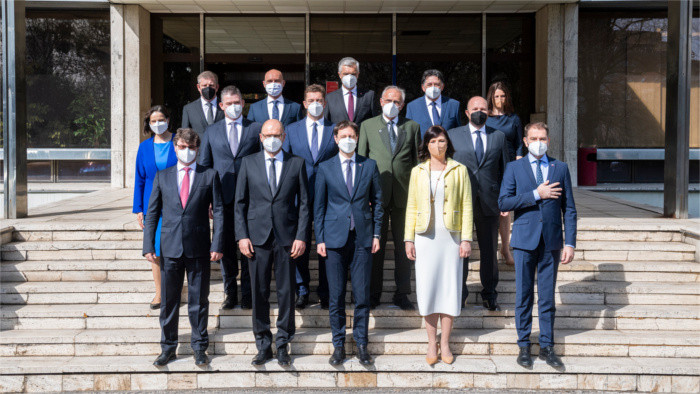 New Prime Minister Eduard Heger's (OLANO) Government is far more likely to see out the entire electoral cycle than the one of his predecessor and party boss Igor Matovič, Economy Minister Richard Sulík (SaS) has told TASR.TV. According to him, the Cabinet is now working in a less tense atmosphere and there's more consensus on decisions. The new health minister, Vladimir Lengvarsky (an OLANO nominee), can also be seen as a boost for the Cabinet, said Sulík. Regular meetings take place every Monday between the prime minister and the chairpersons of the four coalition parties, in order to provide an opportunity to discuss sensitive issues with Matovič. "Relations need to be seemly, and it's enough if they have a working quality," said Sulík. He also defended his nominee, Foreign Minister Ivan Korcok, who expelled three Russian diplomats as a gesture of solidarity with the Czech Republic, which recently said that an explosion in its ammunition warehouse in 2014 was caused by Russian spies.

Although Matovič and Sulík had called each other friends in the past, over the course of last year Matovič began to attack Sulík, who was against shutting businesses due to the epidemic, accusing him of playing down the seriousness of the pandemic and therefore of being responsible for hundreds of future deaths. A few months later, even though businesses had remained closed, Matovič accused Sulík of being responsible for thousands of deaths, mainly due to his failure to acquire test kits for mass testing by the deadline set by Matovič. When a coalition crisis broke out over the purchase of the Sputnik V vaccine from Russia, arranged by Matovič two months ago, Sulík demanded Matovič's resignation. In the end, the latter swapped his post with finance minister Eduard Heger, and the new Government was appointed on April 1st.