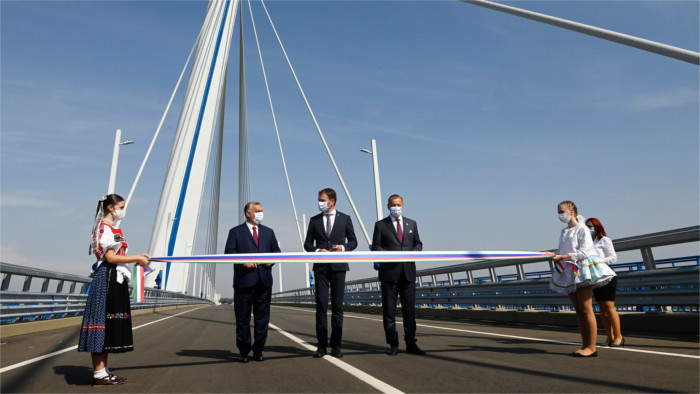 A new 600-metre cross-border bridge over the Danube River, which will facilitate transport between the Slovak town of Komarno, south-western Slovakia, and the Hungarian town of Komarom, was put into operation on Thursday with Slovak Prime Minister Igor Matovic and Hungarian Prime Minister Viktor Orban in attendance. According to Orban, Europe is now being built in Central Europe. "Hungary and Slovakia showed that they are able to build bridges between nations even during the coronavirus outbreak," Matovic said in his speech. The Slovak prime minister views it as a nice symbol that this bridge connecting two nations was co-financed from EU funds. The Monostor Bridge (in Hungarian Monostor Hid) is the tenth bridge over the Danube River to be built in Slovakia. With its height of 118 metres it is the highest bridge on the whole 2,860-kilometre long Danube. In addition to a two-lane main road, there's also a cycling path and a pedestrian path on the bridge. The total cost of the project was over €117 million.