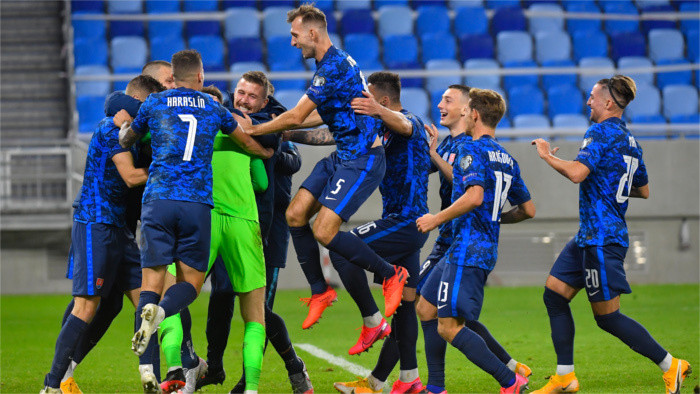 Irishnews.com: Penalty heartbreak in Bratislava for the Irish as Euro dream dies

And BBC.com: The Republic of Ireland's hopes of qualification for the Euro 2020 finals are over after they lost 4-2 on penalties in the play-off in Slovakia.

These are the international headlines summing up the Thursday night match Slovakia played against the Republic of Ireland for a place in the European Championships play-off final. The Slovak squad defeated the Irish team on penalties after the match finished with a 0:0 draw in regular time and also after extra time.

"Slovakia started the game very well with some good passes in the midfield. There were quite a few chances for both teams but what I felt was an overall determination by the Irish players was very evident, and as the game went on, we looked definitely like the team more likely to win," Stephen Kenny, the coach of the Irish players stated at the press conference shortly after the lost match.

Playing in a stadium with no spectators, both teams were also affected by Covid-19 in another respect. Slovak coach Pavel Hapal had to rule out Inter Milan defender Milan Skriniar after he tested positive for Coronavirus while the star midfielder Stanislav Lobotka was missing because of an outbreak at his Italian club Napoli. "I am glad that also without such great players we were able to be successful in our game," said the Slovak team captain Marek Hamšík.

"I have to praise the team for keeping up with the Irish in all dramatic situations of the match as it was difficult to play with such players. But we managed to be an equal rival," stated the coach of the Slovak team Pavel Hapal.

Jan Gregus's audacious chipped penalty evaded Darren Randolph's left hand and was the highlight of the game. Many compared it to the goal of Czechoslovak striker Antonin Panenka who has recently been hospitalised due to Covid-19. At the press conference following the match, Gregus said: "Well, I am happy that it worked out but it was one of the options I had. I knew what I was going to do and I am glad that it went well."

The coach of the Irish Stephen Kenny concluded: "So it's a cruel way to lose but we have to accept it."

Slovakia will now play Northern Ireland in the play-off final on 12th November.